“They Learn From Watching You.”

Find this article at:
go.ncsu.edu/readext?474281
— Written By Gretchen Hofing and last updated by Jayne McBurney

NC State’s SNAP-Ed Steps to Health program has launched a social marketing campaign “They learn from watching you. Eat fruits and veggies and your kids will too.” in 10 southeastern counties in North Carolina. The following counties should expect to hear and see the campaign in a variety of places: Carteret, Craven, Duplin, Jones, Lenoir, New Hanover, Onslow, Pender, Sampson, and Wayne. 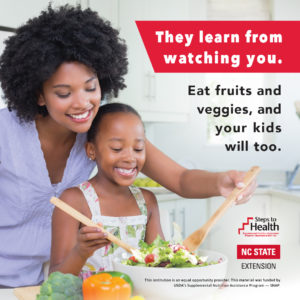 Steps to Health’s social marketing campaign targets low-income mothers of children 8 and younger and encourages moms to eat more fruits and vegetables. Since mothers tend to be the primary food shoppers and meal preparers, they can change what food is available in the home and how it is offered and prepared for their children. Healthy eating messages for mothers have the potential to influence what foods they and their children consume, as well as positively change children’s attitudes about fruits and vegetables. The campaign was developed using messages tested by the USDA followed by focus groups and interviews of women in the targeted counties.

Commercials can be seen on WITN/NBC, WCTI/ABC, WFXI/FOX, WNCT/CBS, and WTVD/ABC television stations and radio ads can be heard on WIKS-FM and WRNS-FM radio stations. Digital and social media ads are also a component of the marketing campaign. Five gas stations across Pender (Handy Mini-Mart in Willard and Maple Hills Food Mart in Maple Hill) and Duplin counties (C-Check in Magnolia, C-Check 4 in Warsaw, and Murphy USA in Wallace) will be displaying the campaign on gas toppers and window clings. Lastly, billboards are posted in Carteret county on Highway 101 (zip code 28516) and Wayne County on US 117 South (zip code 27530). To view the commercials and digital ads go to http://eatfruitsandveggies.org or visit our Steps to Health Facebook page.

For questions about the campaign, please contact Gretchen Hofing, Steps to Health Coordinator at glhofing@ncsu.edu or (919) 515-9141.